THE RENTER IS COMING

How the London Renters Union is pushing back against landlordism (without the help of charity).

When people start conversations about the housing crisis, I often hear them talking about greedy, profiteering landlords. As an organiser with the London Renters Union, I definitely think landlordism is the problem, but what's the solution? To start, I'd ask - what if we thought about renters as much as we thought about landlords? Who are renters, apart from just landlords' victims? For victimhood may not be enough of a shared identity to hold us together in the long fight ahead.

Like almost all Londoners in their thirties, my housing through adulthood has been precarious, as a benefit-claiming renter and a squatter, and I'm from a comfortably middle-class mortgaged home. Most of London's 3 million private renters have it far worse, but there's at least something we share – we rent. I'm interested in this possibility of constructing a shared identity as private renters, as a means of building a renewed movement that could become as important as the labour movement in future generations.

The private rented sector in the UK is a dumping ground for those kicked out of public housing, those without the resources to either buy a home or just to rent somewhere legal and safe, those too tired to keep on squatting, and more. Historically, those affected by the same laws are often forged together in a temporary unity by their shared experience of oppression. A number of new private renters’ unions, and certainly the London Renters Union, is a sort of ‘cross-class’ unity of the precarious multi-ethnic working class, and the newly precarious middle classes. All these groups of precarious renters have hopes and expectations of London that won't be met by its shoddy, damp, exorbitantly expensive housing, whether from experiences in their country of origin, or middle-class town-house upbringings. Our union aspires to be led by the demands of the most marginalised renters, as the more privileges we have the more blind we are to the depth of the transformation that is needed.

Across Europe, there is a growing constituency of dissatisfied renters (hundreds of millions) from a range of backgrounds, mostly in privatised housing, working longer and longer hours to pay their landlords. But generalised dissatisfaction is hardly enough – forging  connections is needed. But how do we connect in a way that doesn't reinforce power dynamics of class and race within the movement? Most people in London don’t identify as being a renter in the same way they identify with being Black or Jewish or a migrant, and yet movements rarely succeed without a shared identity.

How, then, do we bring these and many other identities together in the new political subject of the renter? Most identities are vaunted for their positive attributes and, at the point where we are collectivising around them rather than alone with our shame, we identify with them as a form of attachment, of liberation. When I see parents ashamed of their insecurity, of explaining their eviction to their children, I wonder whether it is possible for us to build a positive identity of the renter. Unlike some other large European cities, private renting was seen as transitory by many in London, on the way to social housing or ownership. Yet as prices increase far out of reach, the shame of insecurity decreases so that it is just a norm that we rent, and an unjust norm at that.

This does mean that speaking to people on the street, we don’t have to ‘explain’ the injustice of the housing crisis. This juncture, where social conditions are juxtaposed with the prevailing common sense of a society, is a moment to be seized with both hands, a moment that can lead to a rupture, led by those who harness the weight of the popular moral framework. Whether or not such a movement succeeds is down to the level of organisation in the community, and whether it is high enough that the movement can claim the inevitable policy shift as a win. Alternatively, we are given reforms because power holders fear this rupture, because they fear public opinion, and because they are beginning to fear renters. And the irony is that it is their own fault: Margaret Thatcher and her peers across Europe may have consolidated conservative rule by privatising social housing, but this short-termist strategy has sown the seeds of its own demise; the newly conservative owners have become landlords, renting their ex-public homes to disenfranchised private renters who will strengthen the left for decades to come. There are more of us than there are of them.

The question we need to ask at this point is this: does renting offer a ‘positive value’ to society, beyond propping up the tourist industry to pay for someone else’s holidays? Though no one wants to be poor, the working class has built the world. Writing from the perspective of a renter, I can say that renters are both workers and locals – but unlike landlords, we make the neighbourhoods in which we then struggle to stay. And while making neighbourhoods can involve changing them as well as maintaining them, and some renters are certainly complicit in gentrification, this can be countered by organising. It’s the love of our area that motivates renter action, and the connections forged not through shared culture, but through the shared experience of struggle. This gives a movement built on anger and precarity the celebratory joy it needs in order to stay alive. Yet still this joy is fleeting; our identity is a kind of tragic love – to help produce our neighbourhoods, in the knowledge of our insecurity, and then be torn from them. In this view, the precarious renter is not just a middle-class consumer-gentrifier, but a producer alienated from the efforts of their labour through eviction and insecurity.

"Watching people in a neighbourhood who come from all over the world chuckle together about a successful action, we can see the beginnings of an identity through shared experience - an identity of struggle. Despite renters' wildly different life experiences, the active transformation of a disempowering experience with your landlord to a defiant experience of shared power as renters is what should give us hope."

The role and value of the renter needs much more critical thought, but there are some signs of success: the renter is coming. Watching people in a neighbourhood who come from all over the world chuckle together about a successful action, we can see the beginnings of an identity through shared experience - an identity of struggle. Despite renters' wildly different life experiences, the active transformation of a disempowering experience with your landlord to a defiant experience of shared power as renters is what should give us hope. Identity isn't built in the abstract but in the concrete experience of collectivisation and solidarity, and that is the task ahead of us. On the doorstep we often ask people ‘If you could change one thing about your housing, what would it be?’. However terrible their situation, many renters start by imagining their current lives, but just a little bit better, with a nostalgia for ‘five years ago’ before the rent rises. Victory is always within reach if what you are hoping for is a small reform. And unless you have experience in collective struggle, you don’t hope for transformation, you dream of it, without a true sense of possibility.

This is why today, more than ever, we need to build unions. Transformative community organising is focused on generalising collective struggle and winning material gains for renters, but with the aim of transforming both renter consciousness and the housing system. Branches of a renters union may provide many locals with their first experience of an organised and democratic multi-ethnic space in their neighbourhood. But what does a union do that a housing action group or an NGO campaign on rents can’t? There are hugely successful housing movements that bring many people together to push for change. There are many community groups which have built a strong identity and a community as part of their work. However, when burnout happens to core volunteers in non-membership organisations, their networks are often lost. Membership organisations give some stability to the movement and allow for continual deep empowerment work, while also helping people to identify with and take ownership over their organisation. As large organisations that can influence political decisions, they allow people to be part of something they can see the social impact of, something they can see has power.

Without aspiring to mass organisation, we consign ourselves to communities where everyone knows each other. Though this feels great, and provides much needed containment in an uncertain world, the communities we have to build to defeat landlordism are huge, and the process of trying to bring together groups of differing origins on the left is arduous. People have founder’s syndrome, many groups are localised and struggle to articulate clear positions, and often each has their own focus. On the other side of the coin, organisations with a more national focus end up prioritising the demand, not the inhabitants. As our experiences in LRU have confirmed, being a member of something city-wide, feeling like you are part of a working class institution, can mean a lot for engagement, quite apart from the legitimacy it can give in negotiation with state institutions. Of course, unionism isn’t necessary for a strong identification with the collective, but once you get to trying to cohere a ‘community’ or an identity that is bigger than a neighbourhood, or as big as 3 million private renters in London, you need a structure.

The London Renters Union is showing that it’s possible to create a strong alliance. On the one hand, many working class families have an on-the-ground rooted knowledge of the community, their anger, and their experiences of the most abusive landlords. On the other, the time and sometimes innocent indignation of the precarious, culturally middle-class, often white renter, and our privilege of being able to more easily write the official-sounding letters that are delivered at actions. Though this is a polarisation, and people from all class and ethnic backgrounds are involved in any element of the work, my point is that these trends can be an uneasy process, with white saviorism, charitable impulse and a ‘servicing’ split easy to fall into. However, a developed discourse on the left about these processes and strong models pushing a solidarity not charity model mean that these tensions can be counteracted. Many might prefer to steer clear of these politically muddy waters, where there is a real danger of falling into paternalistic classism or tokenism. The alternative, however, would be to exclude half the renter body for fear of complex class relations within the movement.

LRU takes the demands and perspectives of the most marginalised renters as its baseline; we simply can't leave it up to charities and advocacy groups to protect us or negotiate these demands. Renters unions may not be able today to strike as easily as workers unions, without the necessary legal protection or a common landlord. Yet, as more and more people pour into the private rented sector, our potential power grows, and our fight to build mass unions becomes all the more important. It's only through collective action that we can win the right to organise, make the rent strike a real possibility once more, and transform the housing system. 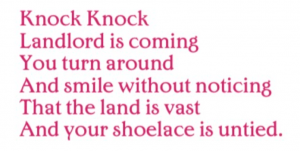 Read the original version of this piece in issue 14 "The Landlord is Coming."